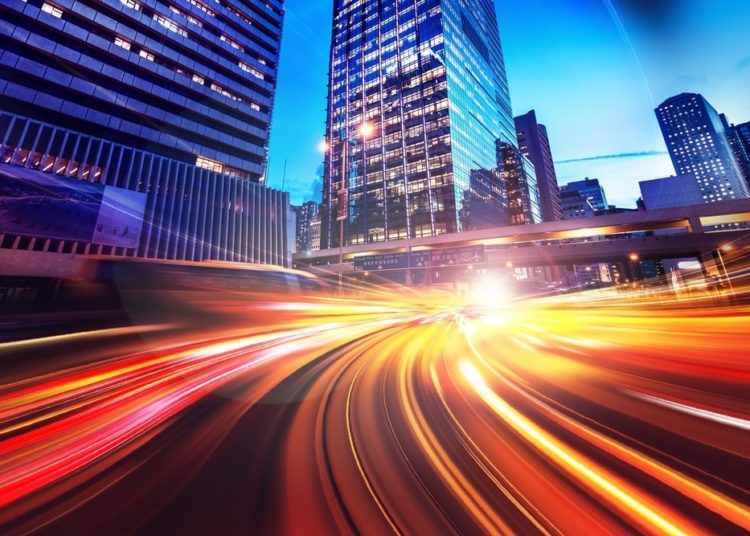 One of the things that makes technology and the sector in general so exciting is the speed at which it moves. Every day we see new and wondrous breakthroughs that seemed unimaginable only a few years ago. Now we can’t imagine life without our mobile phone, cloud solutions or asking “Hey Google, what’s the weather like outside?”

If it feels like technology is getting faster and faster you’d be right, and it’s governed by some predictable Laws.

But before we explore the most important of these Laws it’s worth noting that technology is accelerating in two main ways:

Both of these are increasing at an exponential rate, which gives investors who know how to take advantage of this trend the modern gold rush!

The faster something can be developed and adopted, the faster a return can be earned. If this is accelerating at an exponential rate the opportunity for investors is growing at the same accelerating rate.

What may have taken 20 years to build and sell 10 years ago, might be possible in 5  years today or 2 years in the near future.

In 1965, Gordon Moore made a prediction that would set the pace for our modern digital revolution. He postulated that the number of transistors on a microchip doubles every two years, and the cost of computers halves. In other words, his prediction can be extrapolated to imply that the overall processing power for computers will double every two years. And that’s exactly what has happened since. 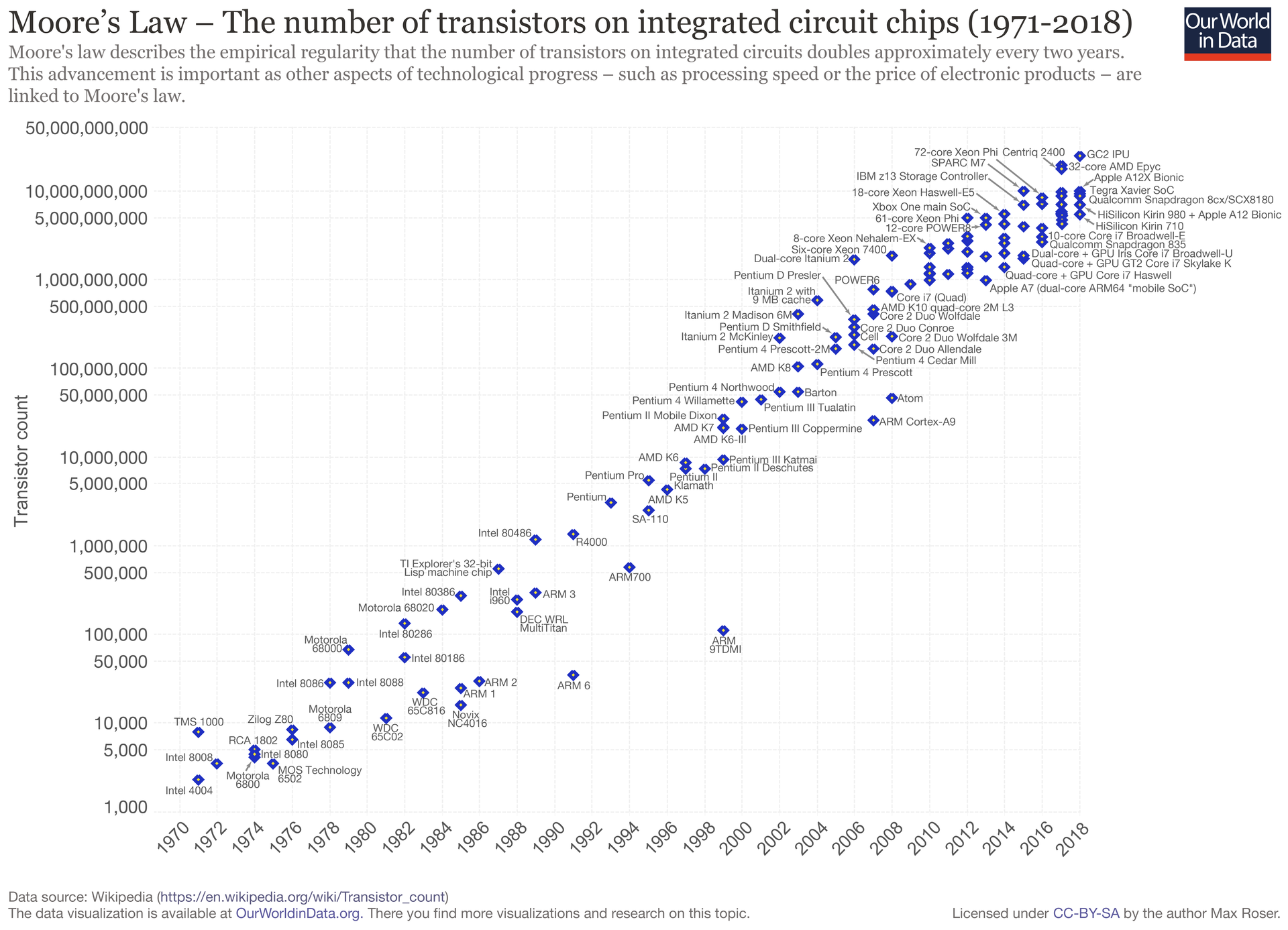 However, what makes Moore’s Law so special is not just the ramifications of the accelerating speed of technology advancement on computer chips, but that the Law isn’t restricted to computer chips. It applies to lots of other technologies (and even society!). Technology in so many other areas has reflected Moore’s Law such as computer storage, the cost of DNA sequencing, internet connectivity, supercomputer power, mobile communications, pixels in cameras, optical fibre capacity, video games and even knowledge itself.

Basically because there is a pattern to these improvements – Moore’s Law (and other Laws like Wright’s Law, Kryder’s Law, Metcalfe’s Law etc) – and we can plot technological progress to date, then we can extrapolate the curves and see what the future holds. We can also anticipate what might be possible in the near future.

For example, in 2003, with the completion of the Human Genome Project, the entire human genome was sequenced for the first time. The sequencing cost nearly $1 billion and took 13 years to complete. In mid 2019 it’s down to days and about $1,000 and we’ve seen startups wanting to reduce it to a fraction of this. However, it’s not just the speed, cost and accuracy improvements that Moore’s Law tell us, but also other knock on possibilities. Individual DNA sequencing can soon transcend into large scale population sequencing and analysis, which then opens up the possibilities of whole new ways of identifying and creating cures to some of the world’s biggest diseases like heart disease. Investors can invest in companies like Spiral Genetics in anticipation of these Laws making fantasy a reality.

The concept of accelerating development shown by Moore’s Law also interestingly transcends to society and accelerating adoption by consumers of the technology itself.

The Our World in Data chart below allows you to compare the adoption rates of new technologies over the period of more than a century.

Why do modern technologies like mobile phones, internet, social media, tablets etc get adopted so much quicker than older technologies did? There are two main reasons: 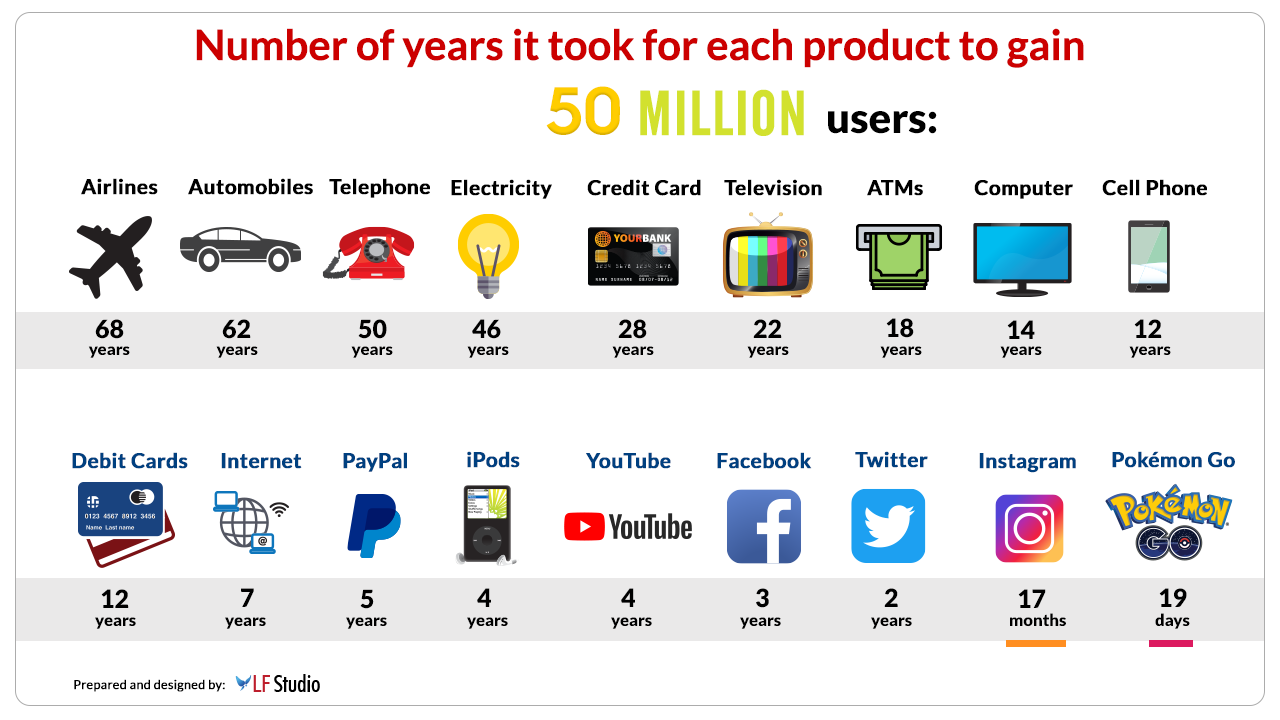 Technology creation and adoption has been increasing at an exponential rate, which often can be predicted by Moore’s Law (and other Law’s). This trend is likely to continue.